Tis the Season to Write… for Rights

December 10th is International Human Rights Day – an annual event with hardly the ripple effect of Black Friday. So today, because justice and social liberties are actually more important that queuing for an iPad, I’m participating in the global Write for Rights campaign. 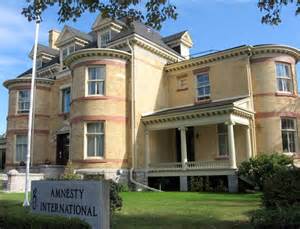 Write for Rights is the yearly Amnesty International campaign that encourages people to write, tweet or email in support of individuals and movements fighting for social justice worldwide. It mobilizes hundreds of thousands to speak up for those who quite often put their lives on the line exposing human rights abuses.

And it does make a difference – Amnesty’s letter-writing campaigns have led to positive action in one-third of the targeted cases while the #WriteforRights campaign exceeded that success with more than half of the cases resolved with a positive outcome.

Over 80 countries participate and this year’s goal is to generate 2 million letters with an anticipated 30 000 from Canada.

A strong domestic policy on Human Rights would lend our government moral leadership internationally so it is heartening to see Canada feature as one of Amnesty’s targeted cases for Indigenous Rights.

When our politicians respect the right to protest – be it of indigenous people in New Brunswick or a cross-section at Toronto’s G20 (condemned as the greatest violation of Civil Rights in Canadian history)  – we make genuine steps toward protecting of Human Rights on the international stage.

Celebrate the 65th anniversary of the Universal Declaration of Human Rights in Sandy Hill today at the Amnesty International office at 312 Laurier Ave where you can  write letters, sign petitions and postcards and listen to guest speakers including Secretary-General Alex Neve.

Preview: You Should Have Stayed Home – A G20 Romp

An edited version of this preview was published by Apt613
“I wasn’t an activist before G20, but G20 made me an activist…” 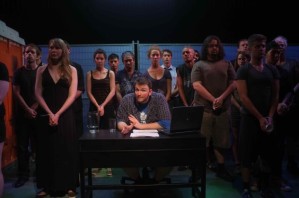 You Should have Stayed Home covers the explosive events in the summer of 2010 when protesters and police clashed violently at Toronto’s G20. Based on a Facebook note detailing the arrest and detention of first time rally attendee Tommy Taylor it’s the story of bystanders and observers caught up in the chaos as police and the government cross the line and Canadian civil rights are attacked.  I spoke with Taylor as the Praxis Theatre production arrived in Ottawa to wrap up its 3year tour.

Toronto’s G20 events are often dismissed and downplayed in the press to such an extent that many Canadians, as Taylor puts it, “are familiar with the story of what happened to things – windows smashed, cop cars set alight – but not with the story of what happened to people that weekend”. The play is based, not on mainstream media accounts, but, on the 11000 word social media note penned by Taylor following his “kettling”, arrest and detention. 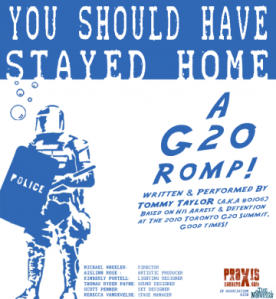 The comical title springs from the absurdity of the situation and a rather shocking “piece of advice that a lot of people gave me afterwards”, says Taylor.  That a Canadian could be detained for attending a public event never entered Taylor’s mind even as he found himself penned in on Toronto’s streets for hours watching others dragged off. Peaceful protestors, passer-bys and kids as young as 15 were swept up and held, 40 to a cage, without water, food or medical attention over the course of 48hours and a lot of the public surmised this was something they’d brought upon themselves. “It’s a bit ironic and an invitation to people that would say this to come and see the show.” It showcases that it’s an entertaining evening and an access point to starting a conversation and raising questions about civil liberties.  Despite the gravity of the topic Taylor promises an evening punctuated with laughter as he puts it “some things are just so ridiculous that the only option left to us is to laugh”.

The show recruits volunteers in each city. Taylor explains, “There is a 10min scene where people join me on stage to recreate the detention centre. We’ve had 200 participants, from as young 14 to as old as 91, across Canada… coming out of their homes and getting in to handcuffs on stage. It’s a powerful tour”.

Arriving in Ottawa on the 20th, Praxis Theatre has secured the participation of several MPs and Taylor invites locals to get involved themselves or encourage their MP to get handcuffed and caged. He’s excited to close the production in the Capital where government and lawmakers have the power to enact real change.

Criss-crossing the country Taylor met Canadians from all walks of life who shared similar stories.  “G20 isn’t this crazy isolated incident. It’s crazy but not all that isolated. In some communities – talking to many Aboriginal people – it can be G20 every day and telling the story in Ottawa at the former courthouse – Arts Court – is a fitting end to the tour.”  He’s heartened by not only the interest of political participants but also by the Parliament Hill reception on opening day; an ideal place to discuss Canadian civil liberties and move toward significant changes.

In the end Taylor hopes the play will raise Canadian awareness of the need to protect civil rights here at home whether for “a straight white guy” in Toronto or a minority rural community. In the face of an assault that goes to the very heart of Canadian freedoms “staying home” is ultimately not an option.

To participate & see the show for free send an email to: participate@praxistheatre.com