An edited version of this article was published in Apt613.ca

trace is a unique inter-generational immigration experience fashioned as a musical work: from prelude, through five movements, to coda. Written, composed and masterfully performed by Jeff Ho it traces three generations of mother’s whose ambitious, gutsy journeys and sacrifices forge their family narrative.

Ho, with enigmatic poise travels time and location bringing to life three powerful characters: his great-grandmother, grandmother and mother. It’s an odd yet compelling contrast to witness this male actor/pianist animating the voices of these fearless women but it sits right and accentuates the emotion of the piece. The dialogue is exclusively that of the women while the contributions of male counterparts – Ho included – are interpreted via a pair of upright pianos to either side of an otherwise bare stage.  The sparseness of the set – with instruments and clothing on creative double-duty as props – allows space and simplicity to further heighten the raw, emotional complexity of the lives which inhabit it. 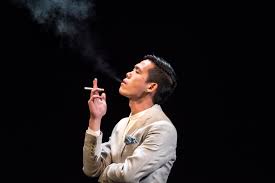 Over the course of 90-minute, Ho moves from one instrument to the other “playing” conversational episodes that become progressively intertwined.  To be fair, it demands commitment to initially follow the shift of character, location and time and a set-up during the Prelude would not go amiss. But this musical construct, with Ho’s gift as a composer and pianist and his ability to plays out his bloodline is an unquestionable success.

The portraits sketched out are vivid. His aged chain-smoking great-grandmother, a self-proclaimed mah-jong queen who fled Japanese-invaded China to Hong Kong and rails against her current limitations. His grandmother’s tireless struggle to better her family despite the crippling debt incurred by her mother-in-law’s gambling and other cruel twists of fate. His own mother’s search following the collapse of her marriage for a “better life” and opportunities for her sons in in Canada. Amid the poverty, betrayal and despair there is an ever-present humour and as Ho moves through pools of illuminated “tiles”, subtly shedding blazer, vest, then shirt, he delicately reveals the inter-connected, shared nature of each woman’s personal experience.

There is a tenderness and attention to detail throughout – whether in ham-fisted portrayals where he breaks in to Chinese or in Ho’s sleight of hand as cigarettes appear from nothing – that draws one deeply in to this familial tapestry. Ho’s acting finesse and his accomplished skills as a musician weave an emotional backdrop that becomes utterly entrancing. Methodically, carefully and authentically he slots stories, characters, cultures and timelines next to one another building to a crescendo immigrant song that is equal parts pain and glory with room for forgiveness and understanding. trace is an exquisite ode to matriarchs, immigrants, families and fearless “women who do what must be done.”