An Evening Pulling Pints down the Gladstone with “Two”

An edited version of this review has been published at Apt613.ca
Set in a northern UK town Jim Cartwright’s Two features Michelle LeBlanc and Richard Gelinas in not only the roles of husband and wife publicans, but also as the dozen or so characters that pop in for a drink over the course of an evening down the pub. 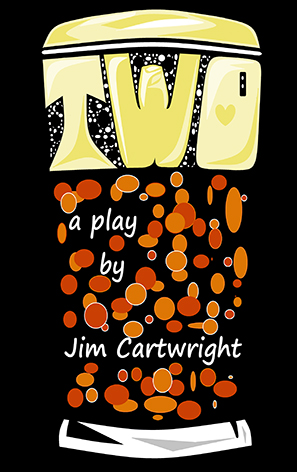 This inventive two-hander opens with the landlord and lady deftly serving imaginary customers whilst biting and snapping vicious asides – the play slowly reveals clues to this brewing storm. Laughingly they pull pints as she rolls her eyes and snarls at his tired banter while he berates her for wasting profits by sitting a drink to a regular. They’ve no social life and no family life as all is “pulled” from behind the bar.

Via swift changes Leblanc and Gelinas take the audience through a cast of characters rich in human emotion as they paint a vivid picture of a community populated by lively and varied regulars. For anyone who has lived in the UK, Cartwright’s writing is bang on as are the portrayals of the very real and penetrative stories that lie behind the everyman down the local. While certain moments may teeter on the verge of saccharin or melodrama, the stories seem penned from real lives and this keeps the narrative solid.

Two invites its audience, some literally on stage, to inhabit the pub as an old dear, “regular as clockwork,” enters stage left. She takes her quiet Guinness and shares that the booming laughter of the butcher down the shops and her drink are the small daily respites from the onerous burden of being the sole aging carer for her ailing husband. The beating heart of her reality lingers as she finishes up and slowly shuffles off.

The characters come and go, some successful and others less so. The lecherous Moth and girlfriend Maudie seem a tired effort; caricature rather than character. While the couple that come to watch the telly and eat packets of crisps prompted spontaneous pleasure and mid-act applause.

LeBlanc is more consistent with greater endurance in maintaining the marathon demands of these performances. The accents are at times slippery as eels with some clearly antipodean moments but there are a few good “loves” that wouldn’t be out of place in Sheffield. In the whole LeBlanc & Gelinas do not disappoint as they populate this pub with the bereft, the angry, the cowed and the hopeful.
When the root of the disharmony between the pub owners is revealed, it’s a sobering coffee at the end of a long night leaving a sharp taste that concludes the evening with the sense of a journey still to be taken.

Finally it’s the collective of portraits that lingers gently, emphasised by Cartwright’s landlord and lady remaining nameless to the end. And that’s the success of this production, some sketches outshine others but it’s the collective that makes it work. Everyday lives publicly moving forward while challenges are privately waged within. These ordinary, even common, lives will undoubtedly leave some uncomfortable and others cold –but to people watchers, voyeurs and those that enjoy social commentary, these curious characters and John P. Kelly’s subtle direction will sing.

A “Freezing” Night of Fun

An edited version of this review was also published in Apt613.
“Freezing” at The Gladstone theatre, steers far enough from the movie echoed in the title to breed familiarity and anticipation – queue many young girls in their finest Anna and Elsa gear – while Ken MacDougall delivers an original storyline guaranteeing a unique and uproarious night out for all ages. 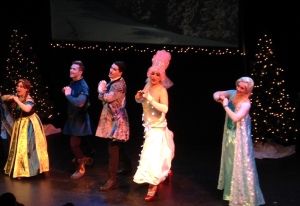 Set in the troubled land of Snow Globe Queen Gerda (Gab Desmond – in a stellar cross-dressed performance) is keen to marry off Princesses Hanna (Esther Vallins) and Adele (Jessica Vandenberg) to preserve the icy kingdom. Enter Hans (Will Lamond), the winter-hating villain of the piece, who threatens endless summer if not granted a royal wedding and all measure of comical action ensues with an eager beaver, a troll with low self-esteem, a handsome ice-man, a tornado and many twists and turns.

To the unacquainted a pantomime is “British theatre traditionally performed at Christmas incorporating song, dance, buffoonery, slapstick, cross-dressing, in-jokes, topical references, and audience participation.”  Audience members cheer the heroes, boo the villain and in this instance some young one’s even had a hockey shoot out.

Costume and styling connect the younger audience with accessible characters while the fresh and fun writing hold that engagement. The cast is charming with particularly strong comic performances from Desmond, Lamond and Shelley Simester as Rubble the troll. The music and choreography are wholly successful as the cast deliver wonderful, rousing song and dance numbers.

Freezing’s is well-paced with seasonally whimsical moments. The music and adventure keeps kids entertained while tongue-firmly-in-cheek asides on everything from the Red Blacks to the LRT and talented performances secure adult amusement. Despite a few not altogether successful jokes, such as the 3-pigs / Senator scandal and an unfortunate commercial break in the proceedings, producers Sarah & Matt Cassidy deliver a winning panto which should well become Ottawa newest holiday tradition.

An edited version of this review was published by Apt613. Heading in to David Mamet’s Glengarry Glen Ross one wonders if, The Avalon Studio production will compare favourably to the excellent movie version with Jack Lemmon, Alan Arkin & Al Pacino. Be assured, this is no poor cousin but a relentlessly vicious and vital theatrical experience of Mamet’s world of shady salesmen and dark deeds. 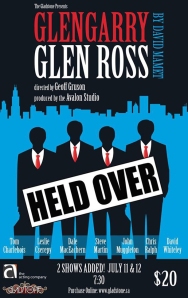 Glengarry Highlands & Glen Ross Farms – two undesirable developments in Florida – follows 24hours in the lives of a gang of thuggish real-estate agents competing on the company leader board in a race of diminishing markets with a punishingly masochistic office manager at the helm. Prepare for profanity and to witness every unethical trick in the book in David Pulitzer Prize winning masterpiece; an uncompromising ode to ethical vacuity and the desperation wrought by the art of the deal. Act1 delivers three quick-fire 2-hander scenes set in the cloying red Chinese restaurant across from the office. Shelley “the Machine” Levene (Tom Charlebois) is the aging company man facing off with the younger office-manager John Williamson (Leslie Cserepy). Levene accuses the boss of dishing out poor leads “You’re giving me fucking toilet paper.” Charlebois’ metamorphose from false bravado to sweaty, twitching desperation versus Cserepy’s taunting cocksure sadist imbued the theatre with a contagious and palpable tension. The introduction of Dave Moss (John Muggleton) and George Aaronow (Chris Ralph) alleviated the mood as Muggleton & Ralph take unethical lows to a new high with well-paced quick-talking dialogue prompting a spontaneous outburst of applause. Act 1 closes with Ricky Roma (Steve Martin) smooth talking a chance encounter with James Lingk (Dale MacEarchern) the puppet-strings fairly visible so silky is the spider web spun. Martin is slightly reminiscent of Al Pacino in this role which temporarily breaks the spell before he hits his stride. 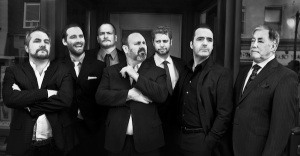 Characters established, the 2nd act concerns the investigation of the overnight office burglary of the “good leads”. The office, in complete disarray, sees Moss incandescent at the interviews being conducted by Detective Baylen (David Whiteley). John Muggleton fairly owns the stage in this brief explosive scene. Meanwhile client Lingk is swimming with sharks when faced with Roma & Levene as he tries to cancel his purchase of the day before.  And the stage is set for the final downward spiral as the production dives gleefully to its heart of darkness. Individually adept the cast work seamlessly as a team creating an evening that is sharp, ruthless and vigorous. Geoff Gruson’s direction is assured; he keeps the motley gang of character performances tight; maintaining a captivating tempo where individual performances shine without detracting from the ensemble. Glengarry Glen Ross is Mamet at his best; capturing a powerfully impotent and angry “world of men”. This revival, from dimmed lights to curtain call, fervently and competently embodies the salesmen’s maxim “Always be Closing”. Glengarry Glen Ross June 24- July 5th Now til July 12th Evenings 7:30PM, Matinees 2:30PM The Gladstone, 910 Gladstone Ave.