An edited version of this review was published by Apt613.ca 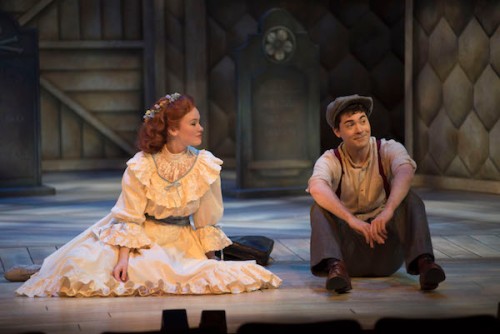 Anne & Gilbert: The Musical has swept in to Ottawa in time for the holiday season and, not being a committed Anne of Green Gables nor family-friendly-format aficionado, the challenge set was whether this piece could entertain as a one-off night at the theatre.

The story follows Lucy Maud Montgomery’s eponymous flame-haired hero in to young womanhood taking cues from the author’s later novels: Anne of Avonlea and Anne of the Island each novel getting its own act in Martha Irving’s smartly directed production.

Created by Nancy White, Bob Johnston and Jeff Hochhause the musical follows childhood rivals Anne and Gilbert now blossomed in to great, if conflicted, friends.  All of Avonlea believes these two are meant to wed but, while Gilbert (Alex Furber) is besotted with Anne (Ellen Denny), she is haughty with overly-saccharine longings for an exotic, ideal and urbane lover.

Act 1 reacquaints the audience with Avonlea and its many iconic characters. Anne and Gilbert teach in neighbouring towns – Anne schooling her former classmates in Avonlea – and both dream of higher academic studies and broader horizons. Act 2 tracks the protagonists’ adventures to the “mainland” university of Redmond where, following Anne’s rejection of Gilbert’s proposal, the two keep a measured distance while love rivals add complication and humour to this homespun story of hesitant love.

The musical score is rousing and the live trio performing adds a superior dimension to the evening. The musical chops of some performers, most notably Denny alongside the outstanding Alison Woolridge as Marilla and the captivating Amanda LeBlanc as Philippa Gordon, far outweigh others. In the whole however the quality of the songs accompanied by the energy and vibrancy of Brittany Banks crowd-pleasing choreography, and the talent of the ensemble make this a clear musical success with a pageant of song and dance characters that evoke emotion and provide undiluted delight.

Alongside the centre-stage story are a handful of well-drawn characters including the formidable Marilla Cuthbert and Rachel Lynde (Robin Craig) who provide a sub-plot on stoicism, resilience and life choices with moving performances of “Our Duty” and the stand-out “When he was my beau”. The two characters provide grounded humour alongside frank and determined hardiness. The amusing Phillipa Gordon (Amanda Leblanc), the wealthiest student at Redmond, who seesaws between beaus fairly lit up the stage with her gleeful dynamism.  Her beaus providing great comedy relief with their Monty Pythonesque stalking about the set. Ottawa’s own Charles Douglas and David Whiteley make impactful contributions to the ensemble. The former in a comical turn as Torontonian millionaire and Anne’s love interest Royal Gardner while the ever talented Whiteley fairly stealing scenes as the bumbling fiddle-playing Ministry-student Moody MacPherson particularly in scenes alongside Leblanc’s Philippa.

Paint me entertained and charmed by this sweet Canadian classic musical tale of Anne & Gilbert.  As seasonal entertainment this family friendly musical is a clear feel-good winner where even a curmudgeon may well find themselves declaring they’re “island through and through”.