On Monday via an unsolicited email from a concerned citizen SandyHillSeen (SHS) discovered that a developer was proposing a 31-storey build in 9-storey zoned Sandy Hill.

On Tuesday Cllr Mathieu Fleury’s “Community Progress Report” came through the letter box.  The positive announcements were reviewed with interest  then relegated to the recycling bin.

On Wednesday another email from concerned citizen brought to our attention that Chapel St was to be opened at Beausoleil Dr in Lowertown. Essentially creating a traffic cut-through from the Queesway via Mann & Chapel through Lowertown to the Market, New Edinburgh or Gatineau. A great new route for all those neighbourhoods to reach the 417 but it cuts right through the heart of a residential zone. 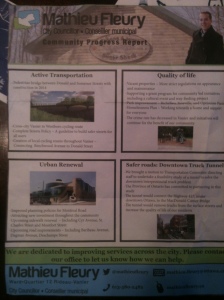 Some how both the significant challenge to zoning and the significant potential increase in traffic on an already busy residential street weren’t important enough to feature in the Councillor’s report. This alone is incredibly disappointing and it demonstrates a lack of transparency when important information is received via the grapevine rather than official channels where decisions are taken on our behalf.

Any Sandy Hill’er who walks or bikes knows the danger of the Chapel & Beausoleil intersection. The danger here is of vital importance as it is the key pedestrian and cycling route to 3 schools: De La Salle, York Street Public & St Anne’s.  Not one of the emails received in regards to the opening of a cut-through route on Chapel St challenged the idea of creating a safe crossing for children. All championed the idea of much needed safety measures to provide a secure crossing. The emails did however share dismay at the lack of consultation, let alone information, and the appropriateness of increasing car traffic in the name of protecting pedestrians. One also has to consider the increase of traffic here at peak times. As well as a great new route to the 417 it’s also perfect for parents driving to the schools.

The Councillors officer Alana Dale, consulted today, puts forth that opening the intersection to traffic is the only way to create a safe crossing and allow for Stop signs under the Highway Traffic Act (HTA).

Of course one can’t really aptly respond to the above as there is no detailed information on the other methods of traffic calming or safe-passage explored – from crossing-guards to traffic lights, speed bumps or closing an alternate section of Chapel St (say Chapel at Rideau for instance) to reduce cut-through.

Allowing more cars on to Chapel St by creating a cut-through will significantly raise tensions between cyclist/pedestrians and car traffic on this already busy route in the heart of the residential neighbourhood. Bear in mind that during the upcoming LRT work at the Campus station more buses will be routed to King Edward which will create a further burden on Chapel St as it stands.

A discussion needs to share what other solutions have been examined and whether the one proposed, without consulting the residents, is indeed the most appropriate.  This website received many alternate ideas however it is our Councillor that must establish an open house discussion on solutions to ensure true responsive and well documented transparency.

At this point, with the news received unofficially less than 24-hours ago, there are very few answers to any questions.

An on-site meeting is set for tomorrow (at Rideau & Chapel 8am Friday 20 Dec) and SHS hopes to share further information and establish if the Cllr office plans to explore alternate approaches and/or modifications to the proposed solution before a decision is made. Hopefully the Councillor will provide a proactive plan including a contact name, timeline for discussions and deadline for decision making.